Our son Jason, is the griller in the family.  I recently had a delicious chicken at his home he grilled in his new “Big Green Egg”, I asked him to adapt his recipe for others to use, here it is!

2 T all purpose BBQ rub or your favorite seasoning rub

Pour half the beer (or other liquid) over the cherry or hickory wood chips and leave them to soak for an hour.

IMPORTANT: The grill should be setup for INDIRECT heat, not direct.  It really cooks in a convection setting.  It should be cooked at around 370 degrees for 1 1/2 hours.

Make two more holes in the top of the beer can and set it aside.   Rub the chicken with the vegetable oil.  Sprinkle some of the BBQ rub inside the body cavity and neck cavity of the bird.  Apply some rub to the outside of the chicken and put the rest in the bear can with the remaining beer.  Hold the chicken upright with the cavity underneath and lower it on to the beer can so the can goes into the cavity.  Pull the legs forward so you get a tripod with the two legs and the beer can.  Tuck the wings behind the back.

Place the chicken in the center of the hot grill and cover.  Cook the chicken for 1   1/2 hours, or until an instant read thermometer registers 170 degrees.  This makes the juiciest chicken.   Once cooked, cover loosely with foil and let rest for 10 minutes before carving.

This is a great cooking tool and takes the place of the beer can, it can be ordered on line from Amazon.com.  The ceramic glazed cooking cone holds the chicken upright on the grill and stops it from falling over.  You can use the marinade described above, juice, or beer inside the Sittin’ Chicken Steamer, to add flavor and moisture to the bird.  Cook the chicken the same way as the beer can recipe.

OVEN COOKING:  Just in case you do not have a grill!

Preheat the oven to 400 degrees.  put the rack at the bottom.  Prepare the chicken with the rub, as described above.  Place the chicken and the beer can in an oven ready baking dish.  This will allow the chicken to cook indirectly and it will catch the juices, you can use the juices for gravy if you like!     Make a loose aluminum foil tent to protect the skin from going too brown and cook for 1/2 hour.  Turn the heat down to 350 degrees and cook for another 1/2 hour.   Remove the aluminum foil tent and rotate the bird around so it cooks evenly.  Check the beer can chicken every half an hour.  It is done with a meat thermometer reads 170 degrees F when inserted into the thickest part of the thigh and when the outside is brown and crispy.  Use tongs and an oven mitt to remove the beer can, let the chicken stand for ten minutes and pour the remaining beer into the dish with the drippings to make a sauce or gravy.

Smokehouse Rub is from Williams-Sonoma.

Here is a do it yourself recipe for a barbecue rub:

In a small bowl mix all the ingredients together and use for the grilled chicken.  You can store extra rub mixture in an airtight container for up to 6 months.

Note:  If you don’t have a rub, you can just use salt and pepper and any other spice you may like. 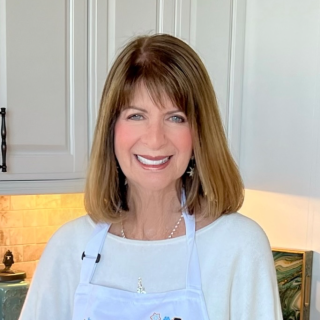 Mother, wife, friend, but most of all Gram! Love learning the craft of cooking and food preparation and expanding my knowledge by using my palate and creativity!

Follow It’s About the Food! (Mary’s joy of Family Cooking) on WordPress.com